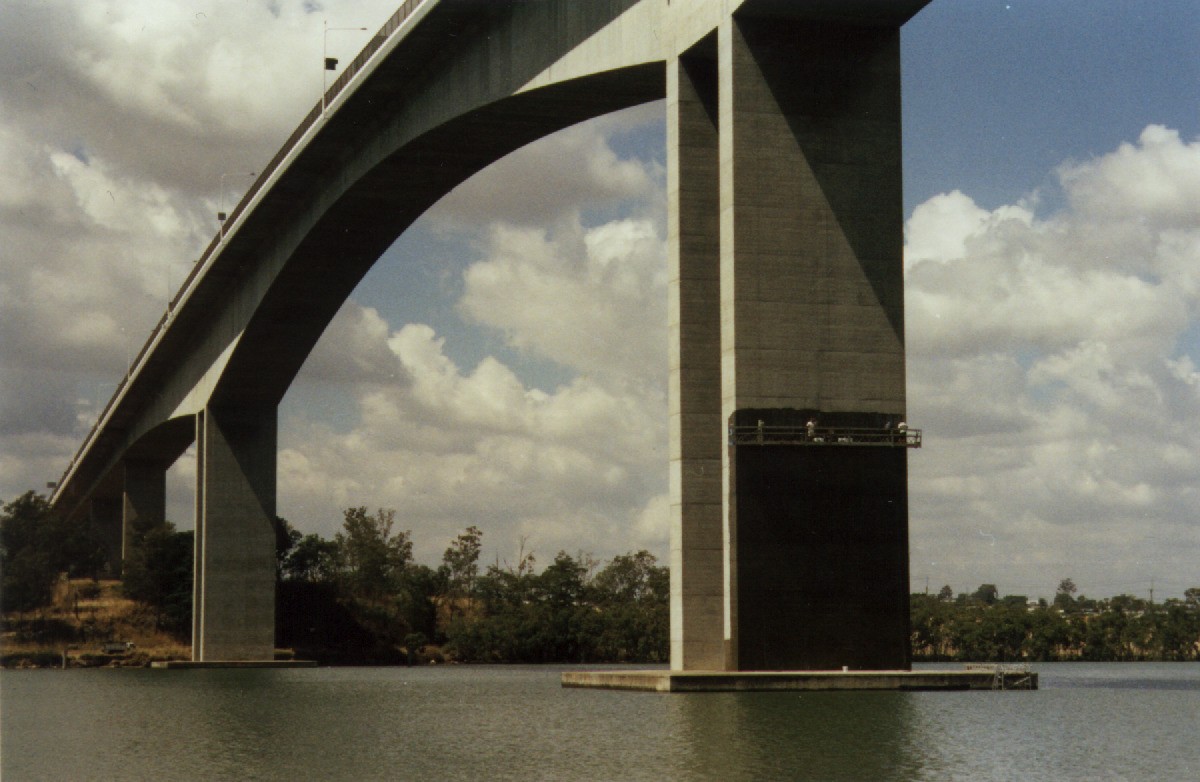 The construction on the Gateway Bridge commenced in 1980 and was completed in 1986. The Gateway Bridge project was an award-winning project having a record span of 260m and a height 80 meters above sea level. A total of 150,000 tons of high-grade concrete was used in the construction of the bridge. The bridge is located on the Gateway Motorway (M1), which is the main traffic link between the north and the south crossing of the Brisbane River in Brisbane, Queensland, Australia.

Overview of the Gateway Bridge, Brisbane River in Brisbane, QL

SPECIFICATIONS:
After a 20-year period, the concrete surfaces of the Gateway Bridge, typically around the pylons, started showing surface erosion due to the conditions of heavy traffic and under the tough marine environment above a salty water river. The bridge authority undertook investigation and decided to treat the all pylons with silane to protect the concrete structures from further erosion or damage.
As requested by the Gateway Bridge Authority and following the project specifications, all concrete pylons of the bridge were impregnated with a silane product. Up to 10,000 square metres of concrete surface were required to be treated. The silane product was required to have a minimum 80% silane active. No material was allowed to drip into the surrounding river during the application and no organic solvent was allowed to be used in the application. Therefore, only a waterbased silane product was allowed for the project.
Tech-Dry Solid Silane was the perfect silane material for this project. It is a waterbased silane cream with 80% silane active. It contains no organic solvent content.The silane cream can stay on the concrete surface longer without any run-off including vertical and overhead surfaces. So, it was perfect for the bridge application. One coat application is all that is required to achieve maximum penetration allowing lower silane cream application time with minimal traffic interruptions.
As requested, a trial project was required on a small scale on site. Concrete cores were taken out from the treated concrete. An average penetration depth of 10mm was achieved by the silane cream treatment. The bridge authority was satisfied with the results and the initial application of the silane cream was allowed to commence in 2002. The project was conducted step by step up to completion in 2006 to ensure the highest quality of treatment was achieved. Up to 40,000 litres of Tech-Dry Solid Silane was used for the project.

The material used was Tech-Dry Solid Silane containing a minimum 80% noctyltriethoxysilane with specification as shown below:

Prior to use, the product is supplied in the form of a thixotropic cream with correct cream consistency according to the product specification. The product is used within its use by date stated on the label. The material is stored in a cool dry place away from direct sunlight. The containers always remain sealed until the contents are required for use.

The concrete surfaces to be treated are sound and free from any curing compounds, release agents, laitance, coatings and sealers. No cracks of more than 0.3 mm were found.

The surfaces were first cleaned using a high-pressure water blast with the aid of a neutral detergent. The concrete was then thoroughly washed to remove any dusts, contaminants and detergent residue from the surface by the water jet.

After washing was completed, the surfaces were allowed to dry for up to 24 hours under good weather conditions before applying the silane cream.

The silane cream was applied using an airless paint sprayer of a model of Graco 5000. The sprayer was operated at a minimum pressure with a high flow rate by using a large spray nozzle of 420 spray tip. This setting was to avoid potential breaking of silane cream into liquid silane during the application. After spraying, the silane cream remained as a continuously white thixotropic cream film on the surface where the silane cream gradually liquefied to a gel-like silane liquid to be slowly absorbed by the surface. Wet film thickness was continuously checked to make sure the correct application rate was achieved.

The surface treated with the silane cream took about 2 hours or more to complete the absorption. The surface remained dark for longer but gradually returned to the original appearance within a few days.

The application rate was strictly controlled at 350-450ml per square metre with a wet film thickness of 0.35 to 45mm measured by using a wet film gauge. Only one coat of application was conducted. No material dripping or run-off from the surface was allowed during the silane cream application 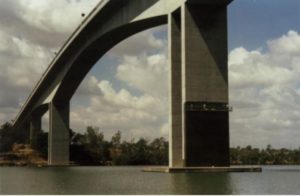 The Gateway Bridge was treated with the silane cream

The application was performed in dry conditions with the concrete surface temperature not exceeding 35oC during application. The application was not conducted if rain or extreme weather was expected within 6 hours after completing of each daily application. After the treated surface was cured for 7 day or more, the surface was inspected and the water repellent effect was checked to ensure all surfaces were protected by the silane treatment.

In accordance to the specifications by the Gateway Bridge Authority, it is required that the bridge be checked and treated with silane every 10 years if necessary. In 2012, the bridge authority started investigation again to decide if further treatment was required after 10 years since the first silane treatment. The concrete cores were again taken from the various sites and an average silane penetration depth of 10mm of treated concrete still remained. There is no evidence showing further concrete erosion and corrosion for the treated concrete. Silane impregnation has significantly reduced the absorption of water, chloride ion or other harmful chemicals to have effectively protected the concrete structures from further surface erosion and concrete corrosion. 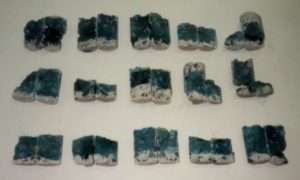 Average penetration depth of 10mm was achieved for the treated concrete