Pressed concrete masonry such as blocks, pavers and roof tiles have been widely accepted in the building industry. Due to the permeable and hydrophilic nature of concrete, water becomes an important factor affecting the performance and the durability of the concrete 1, 2, 3.

Permeability of concrete also leads to efflorescence which becomes a problem for decorative concrete. Efflorescence is caused by moisture moving through the capillaries. The moisture carries the calcium hydroxide produced from cement hydration to the surface. The carbonation of the calcium hydroxide on the surface results in insoluble white calcium salt streaks which are detrimental to the appearance of the concrete 4.

Water repellent admixtures can minimise water movement within the concrete and hence reduce water absorption and efflorescence of the concrete.

Conventional oil-based water repellent admixtures such as stearates and oleates have been used in pressed concrete for many years 5. The performance of these admixtures is not satisfactory due to the fact that they are not permanently bonded to the substrates. The water repellency is due to the hydrophobic deposit of calcium stearate or oleate within the concrete. These admixtures are subject to breakdown due to weathering and biological deterioration.

Research has shown that an admixture involving the application of silicone nanotechnology using a silicone-based water repellent admixture can achieve excellent results. The nano-molecular polysiloxane lines the capillary walls of the concrete via strong siloxane linkages converting the hydrophilic nature of the concrete into an hydrophobic substrate 6, 7, 8. The silicone admixture overcomes the limitations inherent in traditional non-reactive admixtures. Figure 1 show the molecular structures of both conventional and silicone admixtures.

Unless otherwise stated, the test concrete used this research was prepared using GP cement and clean sand at ratio of 1:4. The water addition rate was controlled to obtain a consistent semi-dry concrete mix (not a wet slurry). The admixture was first dispersed into the water and then mixed into the dry concrete mix. The semi-dry concrete mixture was then pressed into a plastic mould and removed immediately to obtain the test disk of size of 30mm high x 70mm diameter as shown in Figure 2. The curing conditions involved at least 24 hours covered in a plastic container and a further 7 days curing to an approximate constant weight at ambient conditions.

Figure 2. Pressed concrete test disks on a sponge saturated in a water bath: 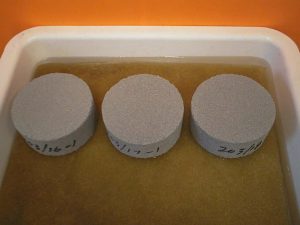 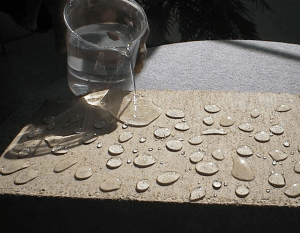 Resistance to water penetration of concrete was investigated via following tests: 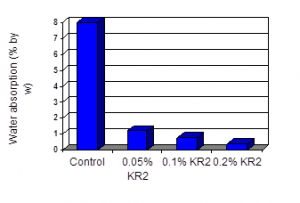 The resistance to rising damp was conducted by placing a commercial concrete block in a water bath. The treated block and the control were placed in water for 24 hours, removed and broken in half as shown in Figure 5. Results showed that block containing 0.05% Emulsion KR2 was dry inside while the control was fully saturated with water. The results indicated that the treated block provided enough resistance to rising damp.

Figure 5. The resistance to rising damp of concrete blocks 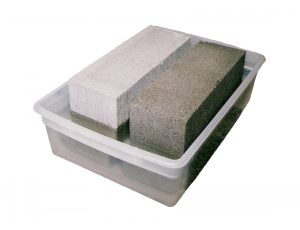 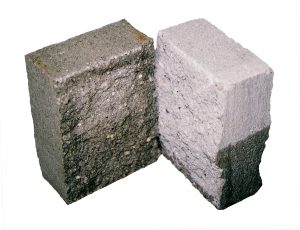 The resistance to wind-driven rain or water penetration under pressure was conducted by Australian Commonwealth Scientific and Industrial Research Organisation (CSIRO) according to ASTM E514-90. This test was equivalent to a wind-driven rain of a wind speed of 120km/h (or 500pa) against a single skin block wall build with commercial concrete blocks containing 0.05% Emulsion KR2 as shown in Figure 6. A water repellent admixture was also added into the mortar to form a complete water-resistant wall system. The results showed that the test wall successfully passed the 4 day test period which was far superior to the ASTM standard of 4 hours. The standard concrete block wall without Emulsion KR2 generally resists significant water penetration for only 20 minutes under the same test conditions.

Figure 6. Resistance to water penetration under pressure of 500pa 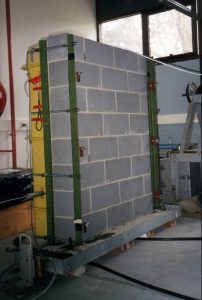 3.3 Durability of the Concrete

The test demonstrated that after 15 cycles of dipping and drying, the disk with Emulsion KR2 remained almost unchanged while the untreated started eroding after 5 cycles. The sample with the stearate showed some resistance to erosion in the early cycles but the erosion then accelerated. This proved that the durability of the concrete with KR2 was superior to those with traditional oil-based admixtures. The sample with KR2 was almost unchanged and still showed a good water repellent effect after the test. Figure 8 shows the concrete disks before and after 15 cycles. Figure 9 shows the weight loss of the test disks after 15 cycles.

Figure 8. Appearance of the concrete disks before & after the salt crystallisation test 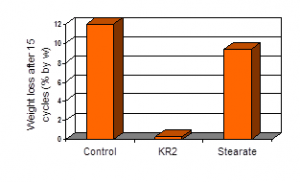 This silicone water repellent admixture has been used by all major Australian block and paver manufacturers including Boral, C&M and Hanson for the past 10 years. The concrete blocks and pavers containing this admixture are highly recommended by architects in Australia. The new admixture is particularly useful for coloured or decorative concrete and for applications where water-resistant construction is required. 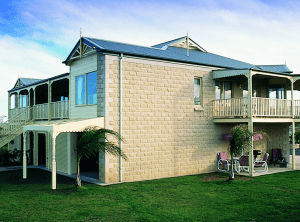 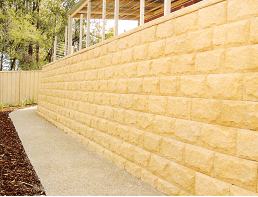 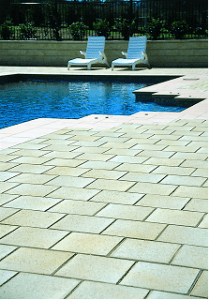